Reports are out claiming that Arsenal skipper Mikel Arteta is full of praise for former Everton teammate Ross Barkley. 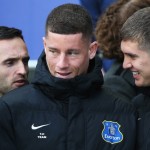 Barkley heads to Brazil as part of an exciting England squad having earned his place in the youthful travelling party with some electric performances in the Premier League.

“Ross has all the potential that you want from a young player and I think he’s got the right mentality as well,” Arteta told evertonfc.com.

“Hopefully he’s going to do well.

“The only worry is that he doesn’t get too much pressure on his shoulders because he’s still young. It’s his first tournament.

“I think it’s his first full season with the first team and having played many games, hopefully they don’t rush him too much, because he’s a great talent.”