Reports are out claiming that Arsenal and Southampton are chasing Porto midfielder Juan Quintero. 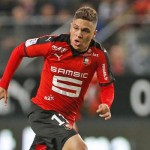 The Mirror reported that the 22-year-old Porto player, who is currently on loan at French club Rennes, is a long-term target for Saints boss Ronald Koeman – after missing out on him last January.

The Colombia international has a £28.3million release clause in his contract although Southampton are hoping to bag him for about £15m.

Quintero, who has been likened to Barcelona superstar Lionel Messi, was a target for Arsenal in the summer of 2014 but his agent said he would only be sold if his release clause was met.