Reports are out claiming that Arsenal boss Arsene Wenger faces a difficult start to the new season. 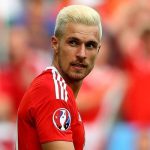 The Times says he could be without Aaron Ramsey, Mesut Ozil, Olivier Giroud and Laurent Koscielny for their opener with Liverpool.

Ramsey, 25, has already admitted he needs extra time off before he returns to training with the Gunners after a strenuous Euro 2016 campaign with Wales.

The midfielder could be joined by Ozil, who played a prominent role for Germany before they were knocked out of the competition by France yesterday.

French duo Koscielny and Giroud have made the final that will be played on Sunday July 10, giving them even less time to recover from their exploits.