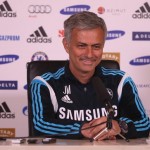 Reports are out claiming that Chelsea boss Jose Mourinho has described Arsenal’s squad as “incredible”.

Arsenal have won nine games in all competitions to reach the FA Cup Final and climb to second place in the table, albeit 10 points behind the Blues.

Last week Mourinho stated that Manchester United’s squad is ‘amazing’ and should be challenging for the title.

And he feels the same about the players Wenger has at his disposal. He said: “Their squad is incredible. Incredible numbers and quality of players, and players for the same position. There are many, many alternatives. The squad is fantastic.”