Theo Walcott feels that the current Arsenal squad is fairly strong ahead of the 2013/14 season. 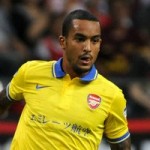 The Gunners remain in pursuit of Liverpool striker Luis Suarez with the England international welcoming the proposed move.

However the 24 year old is of the belief that there is enough quality at the Emirates Stadium even if he does not come.

“Even if we stay as we are now, we are a great team and we showed that in the last 10 games last season. We just need to do that a bit more on a consistent level at the start of this year but every player who is at Arsenal is a top-class player.

“You’re not going to get an average player come to Arsenal, I think that every player that is here is a top-class player. The boss has believed in so many players he has brought in and they have done so well.”