Reports are out claiming that Arsenal midfielder Alex Oxlade-Chamberlain was left frustrated by their 2-2 draw with Liverpool. 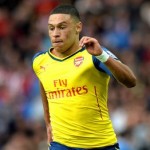 The England international star admitted that Arsenal were not at their best at Liverpool on Sunday.

“I don’t think we played that well today, but sometimes you need to win those games when you don’t play well, especially away from home at a hard place at Anfield.

“Liverpool set the tempo in midfield. They closed down really well but we had to expect that. We saw it out until nearly half-time and it was a blow to go 1-0 down but we responded well.

“The manager said that if we came out well in the second half by building on the goal we got late on, that we’d have a good chance of winning the game. Ex-Striker Nicholas Urging Arsenal To Be Patient With Gabriel Paulista