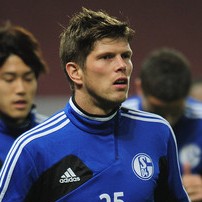 It has been revealed that Arsene Wenger is stepping up his bid for Schalke striker Klaas-Jan Huntelaar.

The Telegraph claim that the Arsenal boss has earmarked the centre-forward position as a priority next month and has been impressed by Huntelaar in the two Champions League matches against Schalke.

The Dutch international striker is out of contract next summer so could be available for as little as £6million in January.