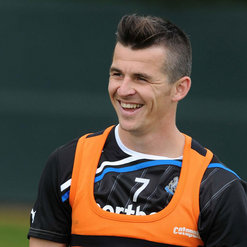 The 28-year old midfielder was today told by Magpies officials that he can leave the club for free after he again criticised the board and immediately there has been a swag of interest.

Another club believed to be on Barton’s trail is Bolton but manager Owen Coyle indicated that he would not be pursuing the former Manchester City man.

“There’s no doubt Joey will have very attractive offers because he’s a talented player.

“We’ll continue to bring the right players to football club. Hopefully I can have one or two new faces, ideally before the QPR game, but certainly before the end of the transfer window.

“Every manager is in the same boat. We’re trying to improve our squads and trying to do the best business we can for our clubs.”