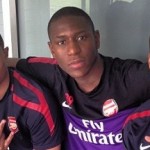 Afobe has joined League One side MK Dons on loan for the 2014/15 season.

The 21-year-old forward has enjoyed a prolific pre-season with the Gunners, scoring a penalty in the first team’s 2-0 victory over Boreham Wood FC on July 19 and netting twice for an Arsenal XI side against Harrow Borough the following weekend.