It has been reported that Arsenal striker Benik Afobe is delighted with his form on-loan at MK Dons. 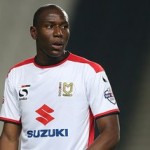 The 21-year-old joined the League One club on a season-long loan in the summer and has already scored 15 goals in 20 appearances – including three braces.

“From day one the manager showed a lot of faith in me and I’m really happy with the way they’ve treated me. I’m really enjoying my time here.

“Sometimes when something clicks, it clicks. I’ve done nothing different to any of my other loans in terms of preparation and hard work – I’ve always done that. I just think it’s about the timing and being in the right place at the right time.”