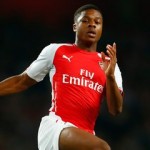 Reports are out claiming that Arsenal striker Chuba Akpom netted a hat-trick in their 4-0 U21 win over Barnsley.

The 19-year-old hot-shot has made just one first-team appearance so far this season, but gave boss Arsene Wenger food for thought with a well-taken treble at the Amex.

Glen Kamara had already put the young Gunners ahead when Akpom fired home his treble. Arsenal To Try Again For Aleksandr Kokorin In January