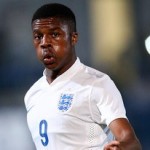 It has been reported that Arsenal striker Chuba Akpom was delighted with his brace as England U20 defeated Holland 3-2.

Akpom was equally delighted by the performance after celebrating his 19th birthday during the week.

“I’m absolutely buzzing, these are the kind of moments you live for,” he said of his late winner.

“To see it fly in was the best feeling ever. I just felt full of adrenalin and then the whole team piled on top of me.” Arsenal Boosted By The Return Of Theo Walcott