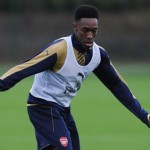 Reports are out claiming that Arsenal striker Danny Welbeck is closing on a playing comeback.

The former Manchester United striker is targeting Arsenal’s FA Cup fifth round match against Hull as his return date from injury.

The England international has not played all season after undergoing knee surgery.

The Daily Telegraph report Welbeck is back in full training and ready to hand a timely boost to Arsene Wenger’s side.

Should the forward come through the match unscathed he would also provide another option for Arsenal in their Champions League clash with Barcelona on February 23.