Reports have emerged claiming that Arsenal forward Joel Campbell believes that his loan experiences at various clubs in Europe over the past few years have made him a better player. 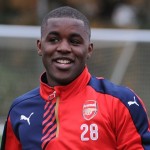 The Costa Rica international has spent time on loan with the likes of Lorient, Real Betis, Olympiacos and Villarreal after signing for the Gunners in 2011.

“I really enjoyed my loan spells at Lorient, Betis, Olympiacos and more recently at Villarreal,” the 23-year-old told Arsenal Player.

“Those experiences really helped me in terms of my personality and as life experience. They were great times for me.

“I had a great coach in Christian Gourcuff [at Lorient] and learnt a lot of things from him. It was like my first lesson here in Europe, I was happy and enjoyed it to the full. It’s an important part of who I am today.

“Betis also treated me really well, the fans were amazing and I have to say I really enjoyed my stay there. The team had a great season and the fans were right behind the team and me personally so I’ll never forget my time there.

“At Olympiacos I had lots of confidence – the coach, Michel, gave me a lot of confidence and made me an important player in the team, which I was able to make the most of. I was a more mature player by that point too as I’d been in Europe for two years and that was really important for me.” Arsenal, Man Utd In Contact With Real Madrid For Isco Mario Mandzukic To Turn Down Chelsea For Arsenal Move