Arsenal striker Joel Campbell is hoping to be given a chance in the Premier League this season after spending the past three years out on loan. 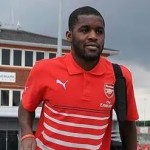 The Costa Rica international told The Sun : “The Premier League’s the most interesting in the world and I’ve always wanted to play here. It’s my dream. And I believe I’m good enough,”.

“I’ve played around 100 games in three different divisions in Europe. Lorient in France, Real Betis in Spain and Olympiakos in Greece, where I played Champions League too.

“I’m confident of being successful in any division in the world.”