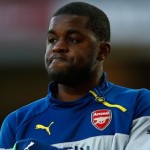 Reports are out claiming that Real Sociedad are eyeing Arsenal striker Joel Campbell.

AS reported that La Real are keen to take the Costa Rica international on-loan for the second-half of the season.

The Gunners could be open to letting the Costa Rican forward spent the rest of the season with David Moyes’ side – but only if he signs extends his current contract, which will expire in January 2016.

Campbell will be able to start negotiating with other clubs as from the summer. Arsenal, who don’t want to see the player leave on a free transfer next year, have initiated talks with the player on the matter.