Reports have emerged claiming that Oliver Bierhoff believes Lukas Podolski should look for a new club at the end of the current season. 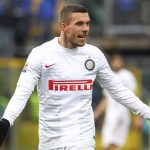 The Germany international, 29, is currently on loan at Inter Milan from Arsenal after struggling for game time in north London and needs to move on in the summer according to ex-Udinese and AC Milan ace Bierhoff.

“When I heard he was going to Milan for six months I was sorry. I know that it is not easy to change clubs in January,” Bierhoff told Bild.

“Football is not the same in every country. I hope he goes to a club which gives him confidence and has an environment where he will play with continuity.

“Going to a top club can mean having to hostile with teammates for a starting spot. Lukas must feel part of the family, he must be in a relaxed environment to do well.”