It has been reported that Premier League new-boys Burnley are chasing Arsenal flop Nicklas Bendtner. 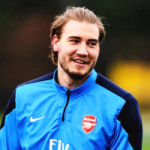 The Daily Express reported that the Denmark international striker has been released by Arsene Wenger having spent most of the season on the bench playing second fiddle to French striker Olivier Giroud.

The 26 year old, who previously spent time on loan at Birmingham, has emerged as a target for ‘Ginger Mourinho’ Sean Dyche.

Burnley supporters’ club player of the year Sam Vokes is expected to miss a large chunk of the season having ruptured his anterior cruciate ligament and Bendtner would be a direct replacement.