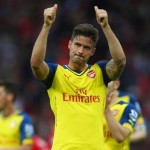 Reports are out claiming that Arsenal striker Olivier Giroud has refused to drag out his public spat with Thierry Henry.

The French international had a pop at Henry last week after being criticised by the Gunners legend.

But he told Le Parisien yesterday: “It is difficult to achieve unanimity. Only great players like Messi or Ronaldo, are not decried, even though Ronaldo is sometimes unloved because people are jealous. It is the job that does it.

“On the contrary, it makes me want to show by my performance that people are wrong to hate me.

“But I’m not p***ed against some people who do not like my player profile.”