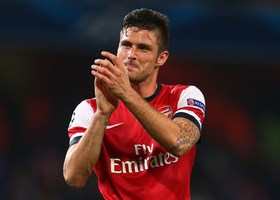 Arsenal striker Olivier Giroud has admitted that he has had to put up with a lot of “c**p” since his move to England.

The French international striker has admitted that is has not been an easy journey after replacing Robin van Persie in the Arsenal side.

He told The Sun on Sunday: “I had to put up with a lot of c**p. You work like a donkey on the pitch, you get knocked around and it feels like people are just not watching.”