Reports are out claiming that Danny Welbeck suggests Arsenal teammate Olivier Giroud is on fire. 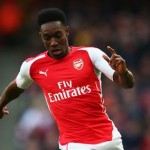 The 28 year old netted a double as the Gunners defeated Newcastle United 2-1 at St James’ Park on Saturday to take his Premier League season tally to 13.

The French international striker now has scored nine goals in his past nine outings in all competitions and his form is certainly not lost on attacking colleague Welbeck.

“Oli has been on flames and he has worked very hard to get the goals,” he told the club’s official website.

“He is winning points for the team and I think collectively everyone has been very impressed with the way he has been playing in 2015.

“He is big and strong, and if defenders get tight to him, he can hold the ball up and bring others into play. I think we utilise that strength of his very well.” Theo Walcott Left Out Of The England Squad