Reports are out claiming that Danny Welbeck was happy to start in Arsenal’s draw at Tottenham. 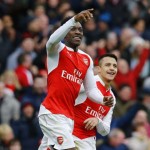 Welbeck said: “Yes, it is difficult being out for so long and coming straight back in to the team.

“With the intensity (at Tottenham) I found it quite difficult but I try and give my best every single game and see how it goes.

“No (I don’t feel sharp yet), it is going to take a while I think. I don’t feel as sharp as I did before my operation and I don’t know how long it will take but I’m getting fitter and stronger each week.

“It is obviously difficult watching from the sidelines and being at home and not being able to play your part on the pitch.

“You try and do as much as you can off of it, work as hard as you can so once you do come back you are ready and you get your opportunity on the pitch and to play your part on for the team.”