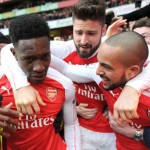 Reports are out claiming that Danny Welbeck was delighted to give Arsenal a vital victory in the Premier League on Sunday.

The 25-year-old striker made his first appearance since April last year when he came on as a late substitute in the eventual 2-1 win over Leicester City at the Emirates Stadium.

The former Manchester United star had been sidelined by a knee injury, which was the worst injury layoff of his career, and was simply pleased to play a part in a win of such magnitude as the Gunners eye a first title in 12 years after going within two points of the league-leading Foxes.

“I think the most important thing was to get the win and the three points and obviously close the gap at the top,” said the England international.

“It has been a bit of a rollercoaster for me. It’s the first time in my career that I’ve missed so much football. It’s been difficult.

“My friends and family know what I’ve been through, so to get that winning goal is a beautiful feeling.”