It has been reported that Arsenal striker Yaya Sanogo is happy with the support he has from manager Arsene Wenger. 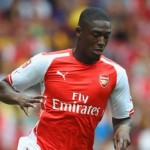 The young Frenchman endured an injury-plagued first season with the Gunners.

He told arsenal.com: “My first year had some ups and downs. I was injured during the first six months, then I made some good progress. It took some time to settle in as I had just arrived at a new club so it was a bit difficult, but at the end we won the cup so I was happy about the season.

“It gives me a lot of confidence that the boss trusts me because he believes in me and has hope. That is why I work so hard every day and keep the faith.

“It is true that when you get to a certain age you have to play all the time. I am 21 and competition in big clubs is unavoidable, so you have to work hard to try to be the best you can.”