Reports are out claiming that Arsenal fans are planning a protest march against manager Arsene Wenger. 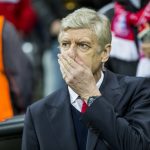 The Sun claims that hundreds of supporters plan to march from Highbury to the Emirates ahead of the game against Bayern Munich next Tuesday to demand a change of boss.

Wenger, 67, faced down an angry mob last April when a demonstration calling for change fell flat.

But with the Gunners out of the title race and facing yet another early Champions League exit, protest organisers believe there is now a greater appetite for a new boss.

Frustrated season-ticket holder Mark King explained: “Our protest during the home game with Norwich last season didn’t work because people were worried about being singled out by Wenger supporters during the game. That was the only time all season that the crowd sang Wenger’s name.

“But the same people were giving the manager dog’s abuse when we went 4-1 down to Liverpool in our first game of this season.

“We will urge the board to withdraw the new contract offer on the table for Wenger.

“Arsene will always be an Arsenal legend. He’s been a fantastic manager. But now it is time for him to leave with his head held high before things get even worse.”