Reports are out claiming that Arsenal’s manager will be sweating on the fitness on England pair Theo Walcott and Alex Oxlade-Chamberlain who were forced off injured in their League Cup defeat to Sheffield Wednesday. 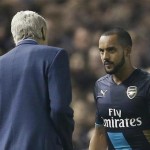 Oxlade-Chamberlain started the match for Arsenal but was forced off after 19 minutes with a muscle injury and replaced by Walcott who then had to besubstituted after also picking up a strain.

The injuries will have crowned a miserable night for Wenger and his Arsenal side who were convincingly beaten 3-0 away to Sheffield Wednesday.

Wenger and Arsenal will eagery await the results of scans that each player will undergo on Wednesday to determine the severity of the injuries. Arsenal Are Not The Title Favourites! – Kolo Toure