It has been reported that Arsenal boss Arsene Wenger is continuing to explore the prospect of signing Real Madrid captain Iker Casillas. 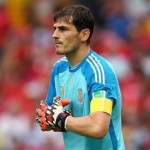 El Confidencial reported that Arsenal are still keen on Casillas and have made the player an offer.

With Keylor Navas arriving from Levante, the Gunners are convinced Real will sell and have offered around €9m, a far cry from his €180m buy-out clause.

Arsenal are also in for David Ospina, with a €4m fee reported to be agreed with Nice for the player’s services.