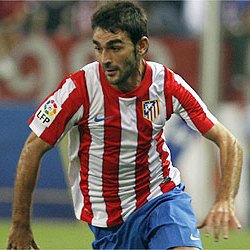 Atletico Madrid forward Adrian insists that he is happy at his current contract despite reports linking him with Arsenal.

The 24-year old Spaniard, who joined last season’s Europa League winners from Deportivo La Coruna last summer, has reportedly emerged on the radar of the Gunners but has made it clear that he wants to continue his career at the Vicente Calderon Stadium.

“We have won a trophy and that for me is very important in my first season. I am happy.

“I have signed a deal for three seasons and my idea is to stay.”