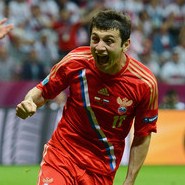 CSKA Moscow midfielder Alan Dzagoev has declared that he is open to a move to England.

The Sun says Dzagoev , who has three goals in two games so far, has been linked with a switch to Arsenal.

And Emirates boss Arsene Wenger will not be happy if Dzagoev keeps banging them in to boost his value.

Dzagoev, 21, said: “It is true that I am willing to try myself in other clubs, in another league, in Europe. I will think about it after the tournament.

“I set myself high standards and I do not think I have played two good games yet.

“Yes I scored in the last game but it was not as good as the first game. I lost the ball too much.”