It has been reported that Arsenal’s pursuit of Antonio Candreva is now likely to end after he signed a new deal with Lazio. 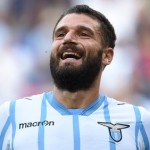 The Gunners, as well as north London rivals Tottenham, were after the 27-year old winger during the summer transfer window but he has now committed himself to Le Aquile for the foreseeable future.

Candreva, who was being linked with a possible January departure, was delighted to have signed a five-year deal with Lazio and was grateful to the club for their support.

“I have had an important meeting with the club. I have renewed the contract with Lazio, I am really happy,” the Italy international told Lazio’s official radio station.

“There is a lot of satisfaction. When I think back to two-and-a-half years ago, I never thought I would get to this point.

“I thank the President (Claudio Lotito) for keeping his word, despite the many rumours that there were. It seemed I had bought houses in every city.”