Reports are out claiming that Manchester United are reportedly interested in Athletic Bilbao defender Aymeric Laporte. 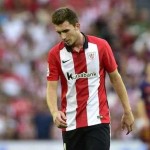 The Manchester Evening News is reporting Laporte has been identified by the Red Devils as a potential summer transfer target along with Everton’s John Stones and Real Madrid’s Raphael Varane.

It is understood that the 21-year-old’s current contract with Bilbao features a £32million buyout clause, making the possibility of a switch to Old Trafford a little more complex.

United are believed to consider the left-footed central defender as the perfect player to accompany Chris Smalling in the heart of United’s defence.

Arsenal are also said to be keen on the French defender.