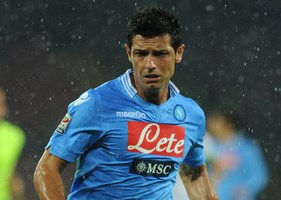 It has been reported that Napoli midfielder Blerim Dzemaili is disappointed with the lack of action he’s seen this season.

The 27 year old Switzerland international has been linked with Arsenal.

Giovanni Branchini told Tele Radio Stereo : “He did think he would have more space in the team this season, but he knows how to make himself useful and he’s now waiting for his chance,”.