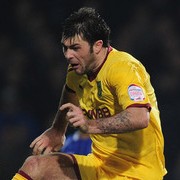 Burnley striker Charlie Austin has declared that he is happy at the club.

The prolific striker is being tracked by Arsenal, Liverpool and Newcastle United.

“I’m not up there – I play in the Championship, I don’t play in the Premier League,” he said.

“If I do get there, brilliant, and I’ll assess that situation when I get there. I Wish We Had Harry Kane – Arsenal Legend Time For Arsenal To Challenge For Premier League – Theo Walcott