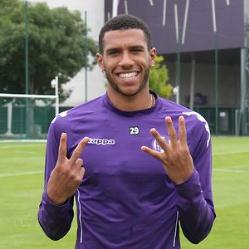 Reports are out claiming that Arsenal are interested in Toulouse midfielder Etienne Capoue.

Mercato365 revealed that Gunners boss Arsene Wenger is eyeing the 24 year old French international as a replacement for Alex Song, who left for Barcelona this week.

Wenger admits he wants another midfield signing and its emerged Toulouse president Olivier Sadran is aware of Arsenal’s interest in the defensive midfielder.