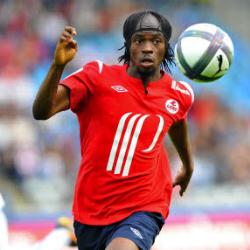 Lille director of football Frederic Paquet has declared that Gervinho will not be sold to a rival French club.

The 24-year old Ivory Coast international is being heavily linked with a move to England with the likes of Arsenal and Liverpool showing considerable interest.

Paquet revealed that if Gervinho happens to leave Lille, he will certainly go to England and not another club in France such as Paris Saint-Germain.

Paquet told La Voix Du Nord : “PSG recently enquired about Gervinho, but they were told we do not wish to sell him to a French club,”.

“Gervinho’s future is uncertain. He could join an English side, or he could stay with us.

“He has to decide exactly what he wants. We are not opposed to the idea of a transfer, but the agreement has to suit us.

“We have yet to receive an offer or proposal.”