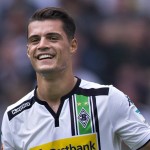 It has been reported that Borussia Monchengladbach midfielder Granit Xhaka has confessed Premier League ambitions.

“At the moment I cannot say how realistic it is.” The Switzerland international also recently admitted that he wouldn’t follow the recent trend of big-money transfers to China.

“I can only speak for myself, but at my age I would never go to China, for no money in the world,” Xhaka told Sport Bild.

“The sporting perspective and everything else would need to be right. Honestly, you want experience such a positive vibe, such a togetherness in football often. That counts too.

“And should I one day want to make the next step, it also has to be an improvement.

“But true, it’s difficult to say no when Manchester City want you and you could play there. That much I have to admit. But I’m certainly not the only one.”