Reports have emerged claiming that Real Madrid captain Iker Casillas has reached agreement with the club to leave. 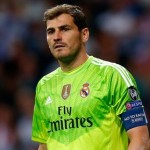 TVE reports that the Spanish international will leave Real Madrid this summer ahead of the arrival of David de Gea from Manchester United.

The news that was announced this afternoon (Wednesday) stated that the Madrid captain has chosen to leave the team because he does not want to be a problem for the club as, according to the channel, De Gea will sign in the coming days and will be presented “in the middle” of next week.

It’s suggested the player and the club are aligned in the same direction – they are working on a consensual goodbye.

Casillas has up to ten offers from various teams including Premier League side Arsenal and, right now, the most important one, from an economic perspective, comes from Turkish side Fenerbahce. His intention is to stay in Europe. Kim Kallstrom To Return For Arsenal Ahead Of Schedule