Sensational transfer news are out claiming that Iker Casillas is seriously considering quitting Real Madrid before next week’s transfer deadline. 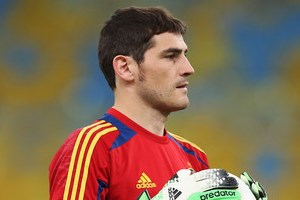 Punto Pelota says what once appeared impossible, is now seeming feasible as Casillas becomes increasingly concerned about his status for club and country after failing to make the pitch for the opening two games of the new season.

Interest from the Premier League is strong, where Arsenal boss Arsene Wenger is keen and Manchester City have also made enquiries this week.

Both clubs have made contact with Casillas’ camp, but will not consider coughing up big for the veteran.

If Real are prepared to keep Casillas’ asking price below £8 million a deal can be achieved.