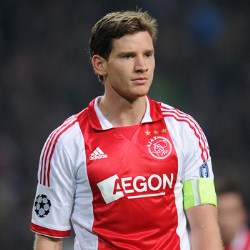 Jan Vertonghen has indicated he could be on his way out at the club.

The Ajax Amsterdam centre-half, who has attracted plenty of attention from Premier League clubs such as Arsenal, Manchester United and Tottenham, suggests that he may not extend his current deal at the end of the season.

The 24 year old told AT5 : “There is talk of a contract extension, but not much has been said,’.

“Perhaps Ajax will find it to be a good thing when I leave, I don’t know.

“But I think that in the future I could have a very good transfer.”