Reports are out claiming that Arsenal will be monitoring the situation at Real Madrid after striker Karim Benzema admitted his frustration with the Spanish giants. 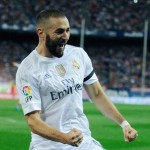 The France international was strongly linked with a switch to north London throughout the summer but opted to remain at the Bernabeu.

The 27-year-old has started the season in superb form and has scored six goals in six La Liga appearances but the forward has been withdrawn by boss Rafa Benitez in all but one of his league appearances for Madrid this season.

“Substitutions are what the coach decides, I’m just there to help my team-mates,” Benzema told AS.

“It’s true I’m fed up of being taken off. I’m calm and will continue to work so I’m not always substituted. He took me off to get a result, for defensive reasons.

“It’s true that the electronic board always shows the No.9. Ask Benitez why that is.”