Reports are out claiming that Lazio striker Keita Balde Diao has played down talk of a move to Liverpool. 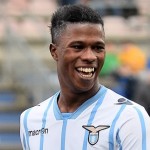 The player’s agent has confirmed the interest of the Reds.

But he said: “I want to stay here and bring Lazio the Champions League title.”

The former Barcelona junior is tied to Lazio until 2018 and has been linked with a move to Arsenal.