Reports are out claiming that Arsenal target Mario Balotelli is edging closer to an AC Milan departure. 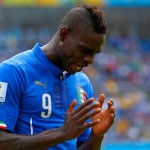 Balotelli’s agent Mino Raiola has claimed the Italy striker has been left “sad and desperate” after AC Milan failed to back him following his disappointing World Cup.

AC Milan vice-president Barbara Berlusconi claimed Balotelli was “replaceable” and the ex-Manchester City striker has been widely criticised in the Italian media.

Raiola said: “Mario is sad, desperate. Only Galliani has defended him while the FIGC (Italian football federation) remains absolutely silent.

“I appreciate Galliani’s comments, but now I want to respond to Barbara Berlusconi. If, for her, Mario is replaceable, she should set up a meeting in the club’s headquarters and we will find a solution, just as I am used to doing.

“I remember that Mario had other important offers. He (Balotelli) is at Milan because of his heart – her (Berlusconi), I don’t know.”

Even some of Balotelli’s team-mates hinted they were frustrated with the 23-year-old while fans have turned on him after Italy’s early exit.

But Raiola added: “It’s disgraceful to point the finger at Balotelli. This is the mirror of a country whose football is dead. But did anyone really think Italy would win the World Cup? I am not surprised by Italy’s failure.

“In Europe our [Italian] clubs no longer win [trophies], so how could the national team perform a miracle?

“I don’t judge people and I don’t know Prandelli. But his tactical plan was a losing one. How can you win playing just with one striker on the pitch? Even Costa Rica played with three strikers.”

Balotelli is being linked with a move to Arsenal, where new sponsors PUMA are keen to see their client make the switch. Filippo Inzaghi Insists AC Milan Will Be Stronger Without Balotelli