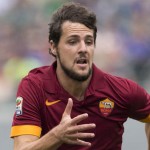 Reports have emerged claiming that Mattia Destro is pushing to leave AS Roma next month.

The Italian international striker has talked up the prospect of moving to Arsenal and his representatives are understood to have held talks with Gunners officials during a London visit last week.

Il Messaggero claims that Destro is fed-up with the lack of action this season under Rudi Garcia and doesn’t believe he has the Frenchman’s confidence.

The striker has welcomed rumours linking him with the Gunners.

“I am delighted with these rumours,” said Destro, “because they are the proof that I’m doing my job well.”