It has been reported that Arsenal have been encouraged in their pursuit of Southampton midfielder Morgan Schneiderlin. 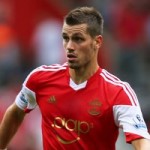 The 24 year old France midfielder revealed that for the sake of his career, a summer move to a top club would be hard to turn down.

The former Strasbourg star explained: “For my progress and my visibility, it would be better to play for a club who play in the Champions League.

“I know there is a lot of speculation, but I still have three years on my contract, it does not depend on me. We’ll see in the coming weeks.”