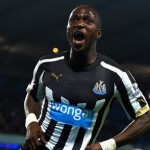 Reports are out claiming that Moussa Sissoko has pledged his commitment to Newcastle United.

Sissoko – speaking before Alan Pardew’s shock decision to leave United for Crystal Palace was taken – said that he is “happy” at St James’ Park.

That will be a relief to Newcastle fans, especially after reports suggested on Monday that his future was one of the reasons for Pardew’s disenchantment with life at Newcastle.

The French international told the Evening Chronicle: “I’m happy here – I said all along I was happy here at Newcastle. I will be here and trying to do my best for this club in 2015.”

The former Toulouse midfielder is linked with a January move to Arsenal. Flamini Refuse To Blame Cazorla In Wake Of Arsenal Defeat