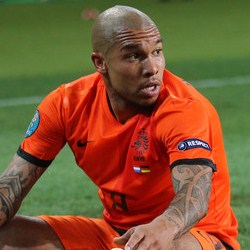 Nigel de Jong is unsure of his future at Manchester City.

The Dutch international midfielder has been linked with Arsenal and Inter Milan since the end of last season.

Speaking about his future to NuSport, de Jong said: “I do not know… my contract runs for another year, I’m in a good position.

“I would like to continue, I’m enjoying myself there, been there for over three years. I have won the two biggest prizes in England: FA Cup and league title.

“That I sometimes sit on the bench, is part of it. There is a rotation system. Ideally I play all the time but eventually I became champion, so it was worth it.”