Reports are out claiming that Arsenal are tracking Genoa winger Diego Perotti. 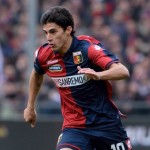 Arsenal had scouts posted to see the Argentine in action yesterday against Napoli.

However, the Argentina international has reaffirmed his commitment to Genoa despite not know what will happen in January.

Perotti told Sky Sport Italia : “In summer there was a lot of speculation but my mind has been always been with Genoa,”.

“I don’t know what could happen in January.”