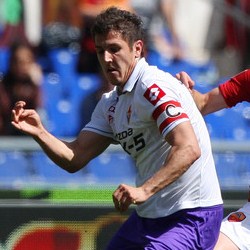 Reports have emerged that Stevan Jovetic is under consideration at Arsenal as a replacement for Robin van Persie.

The Daily Mail reported that Arsenal’s scouting team will hold a meeting at the club’s London Colney HQ at the start of next week to discuss the prospect of replacing wantaway skipper Van Persie.

The Fiorentina attacker is a candidate, though should the Italian club indicate a willingness to sell Chelsea are also likely to compete for his signature.