Yohan Cabaye has admitted that he wants to return to England after struggling for first team football at Paris St Germain following his move from Newcastle. 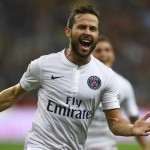 The French international midfielder is seeking regular first-team football ahead of next summer’s European Championships in his native France and has attracted interest from Arsenal, West Ham and Crystal Palace.

Asked he was considering staying in France next season, Cabaye told L’Equipe: “Not really. I know that if I stay, whatever I’ll do, nothing will change.

“If there is an opportunity to go back to England, I hope everyone will be smart enough to do things well. I was criticised when I went to Newcastle. Sometimes it’s better to go backward in order to go forward.”