Reports are out claiming that FC Augsburg’s Baba Rahman is in high demand after Chelsea, Manchester City and Arsenal have all registered an interest in the player. 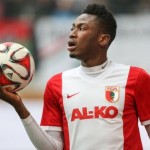 The 21-year-old left-back has only been playing for the German side since last summer, but looks set to be sold with Augsburg demanding a fee of around £14million this summer.

Roma, Juventus, Inter Milan and Atletico Madrid have also expressed interest in the Ghana defender after his impressive season in the Bundesliga following his move from Greuther Furth.

While it is understood that he would prefer a move to an English side, Augsburg’s sporting director Stefen Reuter told German publication Kicker he wants to keep Rahman at the SGL arena.

“There is nothing concrete on our table with regard to Abdul Rahman Baba,” said Reuter.

“We are very happy to have him at our club. We have been happy to hear him saying he feels great being with us.”